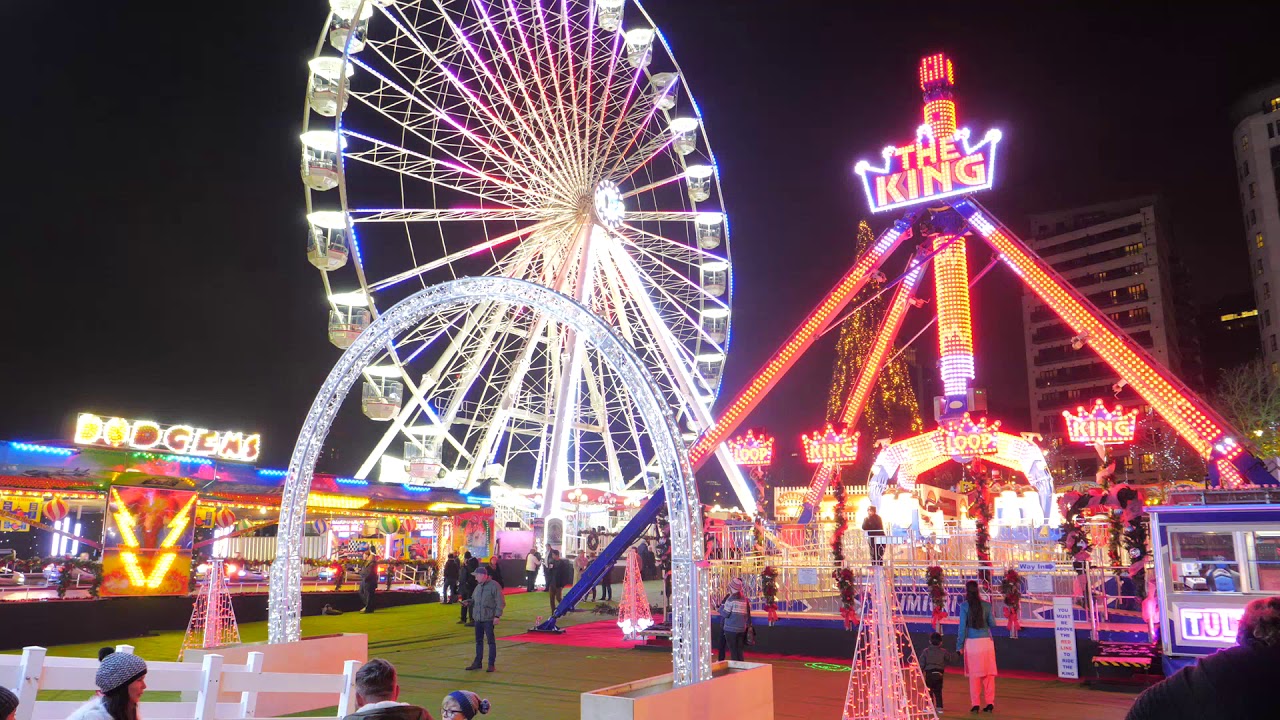 Today we take a fond look back to 2017 when the annual Big Wheel and Ice Rink came to Eastside Green opposite Millennium Point. For those of you who you unaware, each year the city welcomes a few festive staples of the Birmingham festive calendar including the Frankfurt Christmas Market and the Big Wheel and Ice Rink.  In 2017, the usual home of the Big Wheel & Ice Rink in Centenary Square was out of bounds due to the ongoing development work around infrastructure and the new tram links. After a few considerations, Eastside Green on New Canal Street was chosen as the temporary site for the festive attraction, directly opposite our landmark public building. The location was chosen for it’s close proximity to the city centre and Digbeth, parking via the multi-story at Millennium Point and the travel links via Birmingham Moor Street and New Street.

What was there?
Described as “bigger and better than ever” at the time, the attraction included numerous fairground rides, food stalls, festive decor and, of course, the ice rink itself with its own lounge and the big wheel – all lit up to create its own magical winter wonderland. Food stalls included German bratwurst and Chinese bibble waffles to quarter-pounder burgers and ostrich burgers, with one stall even offering a full Christmas dinner plated up or wrapped in a giant Yorkshire pudding! the on-site Christmas Bar boasted a huge 30ft tree protruding from its roof (although it didn’t top our 39 ft tree!) where people could stop and enjoy a warm Bailey’s hot chocolate alongside mulled wine, prosecco and ciders. The bar also had a viewing platform where people could watch family and friends zoom around on the ice. If this wasn’t magical enough, the festive Coca-Cola truck pulled appeared on site for a few days as one of its locations around the UK! The attraction was opened by Santa himself and the Lord Mayor in late November and it ran straight through to New Year’s Day, staying open late New Year’s Eve so visitors could reign in the new year in style.

The Big Wheel & Ice Rink returned in 2018 in a more limited capacity due to the start of HS2 works on part of the green, but we will never forget the huge success it had in 2017 and how it transformed a cosy space outside our award-winning venue into a winter wonderland! Sadly, like the Frankfurt Market, it has not returned to Birmingham this year due to the coronavirus pandemic. However, don’t get too downhearted because, like the Christmas activities at Millennium Point, it will be back in 2021!

Did you visit the Big Wheel & Ice Rink when it was outside Millennium Point? Let us know on social media by tagging @millenniumpoint.