With the countdown to our 18th Birthday officially on, we take a look back on some of our key events and highlights over the years so far.

This week we are looking back at our official opening ceremony and a visit from the only female speaker to ever serve in the House of Commons.

We are incredibly proud to have welcomed two of the most inspiring female figures in recent times, in the form of Her Majesty Queen Elizabeth the Second and Betty Boothroyd, to Millennium Point so early in our life.

These visits helped to set the tone for the years ahead, with more high-level visits to come and an ever-increasing focus on those people who really do make a difference.

2002: Official Opening & Unveiling by Her Majesty 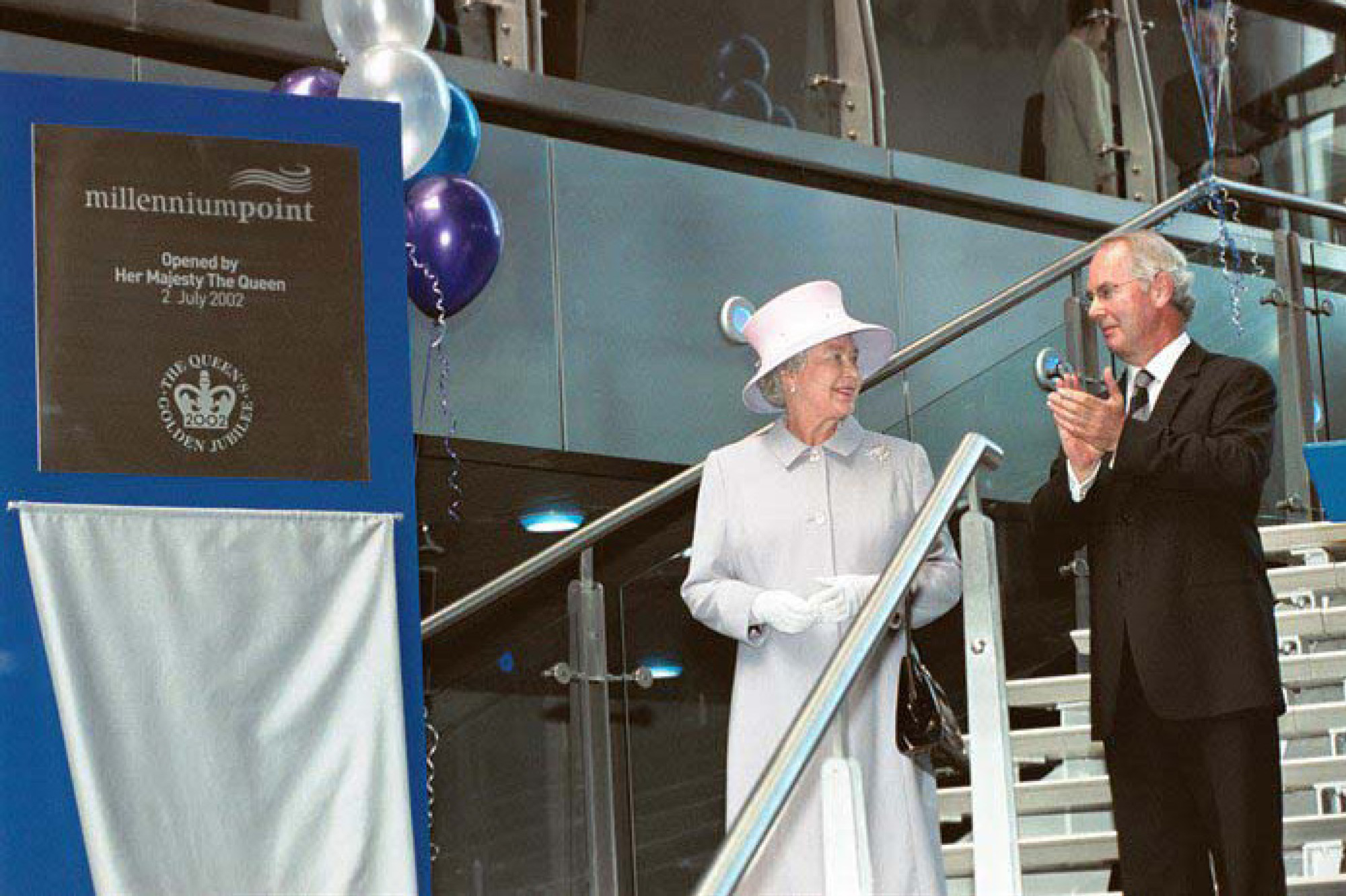 Millennium Point was created as the regeneration of a 12-acre brownfield site and was designed by architects Nicholas Grimshaw and Partners, who also designed the redevelopment of London train stations; Euston and Waterloo.

It was originally developed in partnership between various public and private sector institutions, including Birmingham City Council and Birmingham City University and has now been England’s largest landmark millennium project outside of the capital since 1995.

Despite being in use since late September 2001, Millennium Point was officially unveiled by Her Majesty Queen Elizabeth II on Tuesday 2nd July 2002.

The Queen was visiting the West Midlands as part of her Golden Jubilee tour around Britain, and following the unveiling of Millennium Point, she expressed that she had no doubt Millennium Point would be used to ‘inspire the next generation who will shape the technology and industry of tomorrow’.

You can read her full speech here.

We had the pleasure of hosting a visit from former West Bromwich MP, Betty Boothroyd, in 2003.

Affectionately known across the nation as ‘madame speaker’, Betty Boothroyd was one of the most successful upholders of standard in the House of Commons.

She is the only female to have served as a Speaker in the Commons as is one of only two living, former Speakers.

Betty visited Millennium Point after retiring from that role and being invited by the University Of The First Age, who arranged a televised link between Betty and children and young adults in South Africa, who she discussed politics with.

She then delivered a powerful speech encouraging young people in attendance at Millennium Point to think about politics and how it affects the world around them.

Betty received an Honorary Doctor of Civil Law award and was named the millennium’s first Life Peer before also being appointed the Order of Merit, which is one of Britain’s highest honours gifted by Her Majesty The Queen.

Her reputation of being tough yet very charming led to a more accessible parliament to the public and we are honoured to have hosted such a truly loved icon here at Millennium Point.